As fans of the royal family, we all know that they can rack up expenses during their duties to the country, but it comes as no surprise that the most expensive journey taken in 2019-2020 involved Meghan Markle and Prince Harry.

That’s right. Their trip to Africa last year racked up an astounding $310,000!

Doing the rounds of South Africa, Botswana, Angola, and Malawi in 2019 was considered by British government figures and diplomats to be one of the most important royal engagements of the year.

So much for Meghan Markle and Prince Harry always being pushed out of the spotlight, right?

Even though both Harry and Meghan were on an official royal trip financed by the British taxpayer, they saw fit to begin their campaign against the British media and the royal family.

If you recall, this was the trip where Meghan Markle provided us with the best acting performance of her career in the infamous “I’m not okay” interview carried out by ITV.

This trip also saw the royal couple go into business for themselves, so to speak, when they began recording the disastrous documentary that painted Prince Harry’s family in a bad light.

That’s right, Meghan Markle, a former Z-list actress who was handed a fairytale $40 million wedding that she’d never be able to afford on her own, as well as royal titles that she doesn’t deserve and would later cash in for Netflix dollars, saw fit to badmouth the very people who made her who she is today.

Without the British royal family, and indeed the British taxpayer, Meghan Markle would be a fading middle-aged actress hustling for minor acting jobs in Toronto.

Despite a pampered lavish trip to Africa, Meghan Markle made sure to let us know she “wasn’t okay.”

If anyone ever doubted that Meghan Markle is all about Meghan Markle, the interview she did with British news outlet ITV during the Africa tour confirmed it.

It was also a sign that Meghan either didn’t understand the meaning of duty or simply wasn’t interested in carrying out her side of the bargain when she signed up as a working royal family member. 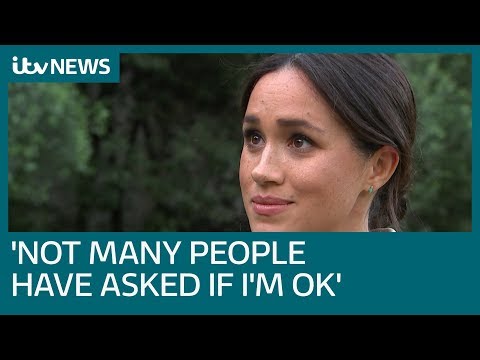 Indeed, the $40 million wedding, the luxurious trips where she was accompanied by staff who catered to her every whim, and a $1 million yearly clothing budget all come with a price, as most things in life do.

If you can’t pay for it, live it up as a Royal?x

That price? It isn’t much. You appear where the British government and royal family need you to appear, you wave to people, you smile, you shake hands, and you pay back the British taxpayer who funds your lifestyle by promoting the British reputation overseas.

I know this may be revelatory to both Meghan Markle and her fans, but when you’re on official royal duty funded by the British taxpayer, it’s not actually all about you.

It’s about the country, the monarchy, and carrying out what is essentially PR for both.

With Meghan Markle and Prince Harry now officially out of the way, funds can be spent on royals who can do the job

I know that Meghan Markle acolytes will be foaming at the mouth as they point out that the Cambridge’s spent $150,000 on a trip to Pakistan and that Prince Charles cost the taxpayer $266,000 for a key political trip to Oman after the death of Sultan Qaboos bin Said.

The difference, however, is that on these trips, the Cambridge’s and the Prince of Wales did their job.

They didn’t make it all about them. They knew they were spending a decent chunk of change and did what was required of them in a professional manner.

Hopefully, with Prince Harry and Meghan Markle out of the royal picture, we’ll see the funds once earmarked for them spent on royals who actually know how to do their job.